By Jessica Donati and Ehsanullah Amiri

A breakdown in Afghanistan’s relationship with Pakistan has driven a flood of Afghans living there to return, severely straining their war-ravaged homeland’s resources just as it is experiencing an escalation of violence.

Many of last year’s more than 600,000 returnees had lived in Pakistan for decades as refugees, both documented and undocumented, and have few local connections to assist in their resettlement.

The pressure on aid organizations—also dealing with more than half a million Afghans displaced internally by fighting in 2016—has left many returnees facing the harsh winter without any financial assistance.

“This government hasn’t even given me a glass of cold water,” said Maghfourullah Khadem, part of a community of about 350 families trying to make a fresh start in tents on a barren plot in Barekab, a village on the northern edge of Kabul province.

The influx of people to informal settlements outside major cities is causing living costs to soar while depressing the labor market. And the United Nations and other agencies are expecting similar numbers this year.

“The refugees are a humanitarian issue and should not be linked to politics,” said Hafiz Ahmad Miakhel, an adviser at the Afghan Ministry of Refugees and Repatriations. “But unfortunately sometimes our countrymen become the victims of political issues.”

Ties between Afghanistan and Pakistan have been troubled for a long time. The exodus, however, follows the collapse in early 2016 of a joint effort to start peace talks with the Taliban and a series of high-profile terror attacks in both countries.

Kabul accuses Pakistan of nurturing the Taliban, allowing its leaders to live openly in cities like Quetta and offering its fighters medical treatment and shelter across the border. Islamabad denies the charge and similarly blames Afghanistan for terror attacks on Pakistani soil.

In June, Pakistan introduced strict controls at the Torkham border crossing, choking off an important economic artery for Afghanistan, and officials say they plan similar controls at other crossings in 2017. Pakistani officials say the measures are to stop militants from entering, but concede they also have made it harder for Afghan refugees to maintain cross-border ties, leading many to decide to return.

Kabul has responded by moving closer diplomatically to India, Pakistan’s rival, and helping India to sideline Pakistan at regional events. 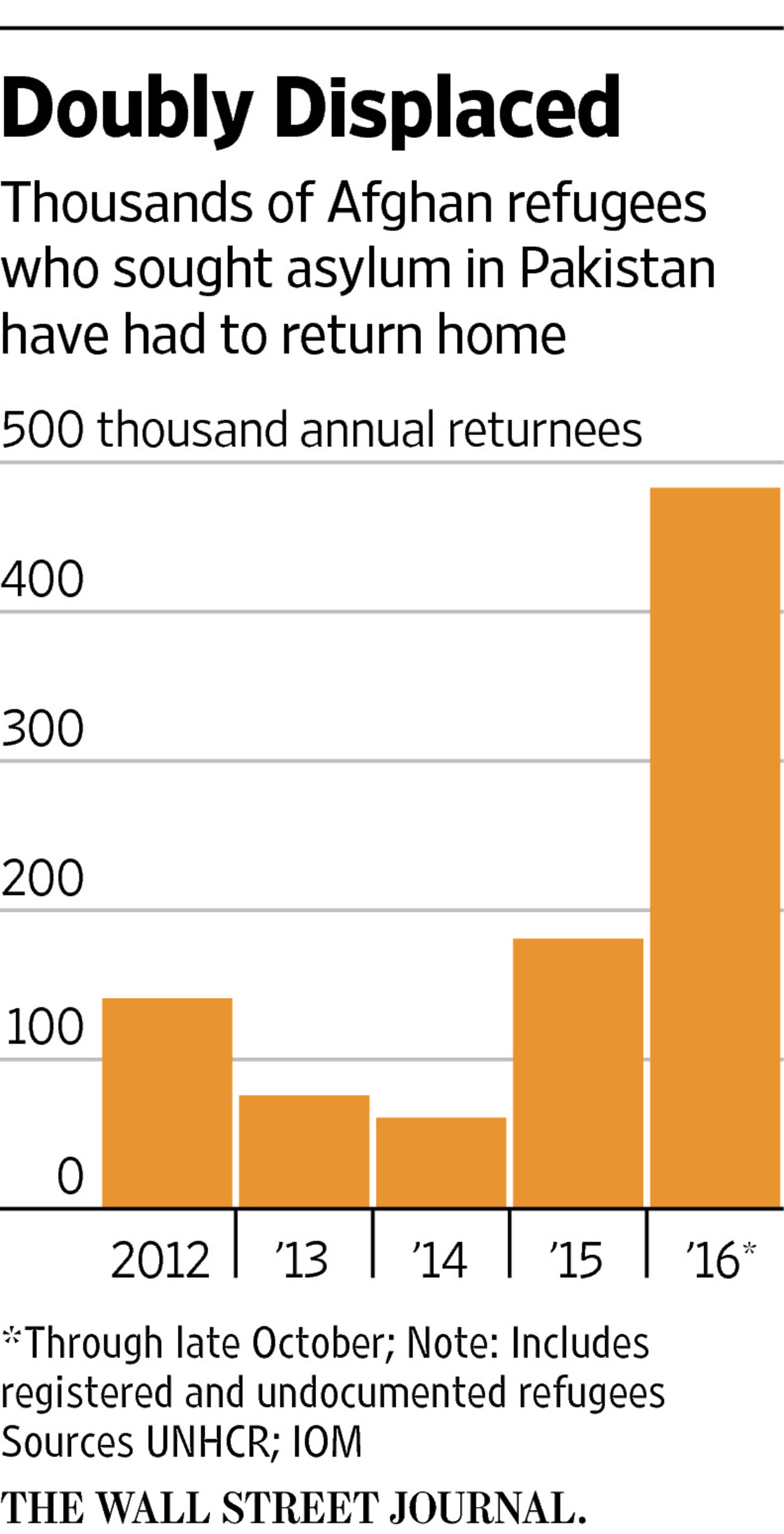 Refugees and aid groups say increasing harassment and discrimination in Pakistan have also been driving the returns, along with uncertainty about the renewal of refugee registration cards. Around 2.5 million Afghans are estimated to be living in Pakistan; around half are documented refugees.

Pakistani officials say they would like to see Afghan refugees return home with dignity, and Islamabad is committed to voluntary returns. They say the problems occurred this summer in the Khyber-Pakhtunkhwa province during a crackdown by local authorities on undocumented refugees.

Imran Zeb Khan, Pakistan’s commissioner for Afghan refugees, said the government stepped in quickly to stop what he described as “totally uncalled-for harassment.”

Afghan officials say the harassment continues and is a primary factor in the returns.

The Afghan government, which depends on foreign aid for most of its funding, has promised refugees land and small cash grants worth $50 to help them resettle. But it is unclear how the allocation system will work. An official at Afghanistan’s Independent Land Authority declined to comment

The UNHCR initially offered a $400 aid package to Afghan refugees with documents to help them make a fresh start—a level that some Afghan and Pakistani officials say encouraged returns. But the program quickly ran out of money after returns were 10 times higher than anticipated.

“The intention was that $400 could enable returnee families to pool their resources and hopefully invest in a small business, buy land and pay rent for a few months,” said Maya Ameratunga, country representative for the U.N. High Commissioner for Refugees.

The UNHCR has now halted official repatriations until March and is working out a more sustainable program with donors.

The International Organization for Migration, which helps the most vulnerable undocumented Afghan returnees, assisted only about a third of the 240,000 who arrived without papers this year.

The families setting up in Barekab said their homes in Pakistan were bulldozed in July, and police escorted them to the border because they didn’t have documents. The community bought empty land here at a discount several months ago after being forced to move several times. They are hoping to make it a permanent home.

Mr. Khadem, who was back for the first time since fleeing as a child when the Soviets invaded in 1979, said relatives had sent money and the men were able to find occasional work in local factories.

The first mud-brick homes were going up but most people were living in tents, many improvised from sheets. Women were cooking over open fires outside.

Meanwhile, clashes between government and Taliban forces, which escalated after the withdrawal of most foreign troops two years ago, drove more than half a million Afghans from their homes in 2016, compounding the crisis.

The U.N. has raised a little over half of the $150 million needed to cover the costs of emergency support to Afghans displaced inside the country, a sign of growing donor fatigue after decades of war and competing crises in Syria and elsewhere.