By Haq Nawaz Khan and Tim Craig for the Washington Post

Osama bin Laden hid out here for months, if not years. But in the hills surrounding Abbottabad in north-western Pakistan, residents say they face a far scarier menace than terrorists.

With descriptive stories that bring to mind mythological tales of man against beast, Abbottabad residents claim to be locked in a terrifying battle against Pakistan’s endangered population of leopards. The big cats – referred to as common leopards to distinguish them from their smaller cousins, snow leopards – lurk in the Himalayan foothills.

At dusk, common leopards slink from the mountains into the villages that have been steadily encroaching deeper into Pakistan’s forests. Then, residents say, they pounce – killing at least four people and injuring several others over the past four years.

“The leopard just sucked the blood out of her, and then she was dead,” said Zakir Abbasi, 36, recounting a leopard attack in January that killed his seven-year-old niece, Saba Noor.

Embellished? That’s common in this part of Pakistan, a patchwork of communities on the country’s rugged western frontier. As news spreads from village to village, the line between fact and fable is often blurred. But with stories like these in circulation, villagers here in northern Khyber Pakhtunkhwa province are lashing out at the leopards.

Over the past decade, dozens of leopards have been shot or poisoned in what wildlife officials fear is the systematic culling of one of Pakistan’s most threatened species. Now, officials are rushing to convince Pakistanis from rural villages – where poverty is widespread and educational facilities are scarce – about the need to protect even those animals they consider to be fearsome.

“The entire ecological system is being disturbed,” said Iftikhar-uz-Zaman, district forest officer in Abbottabad. “The growing human population and their intervention in the natural habitats of leopards is causing rising attacks on humans, and people are retaliating and killing the leopards.”

The precise number of common leopards remaining in Pakistan is not known, but wildlife experts suspect it’s no more than a few hundred. What’s clear, however, is that their numbers are shrinking because of Pakistan’s rapid population growth and its abysmal record of protecting forests.

About 180 million people live in Pakistan, and the UN expects that by 2050 that number will top 300 million. According to various studies, Pakistan has retained only 2% to 5% of its original tree cover, and it’s losing about 27,300 hectares of trees annually.

Small and medium-size mammals that once flourished in northern Pakistan, such as the Himalayan musk deer, are threatened. Now, hungry leopards are showing up around Abbottabad, which became famous in 2011 when the US military killed Bin Laden at a compound here.

On the outskirts of town, in the scenic Galiyat valley, villagers say the first sign of a leopard is when stray dogs and cats disappear. Then attacks on livestock begin. Eventually, villagers come face to face with the animals, which are naturally reclusive. 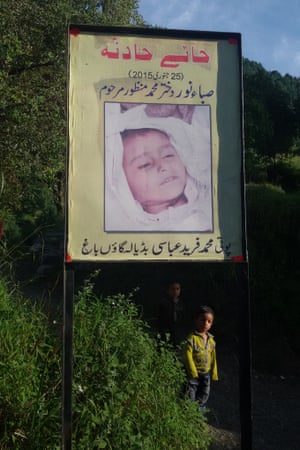 A memorial to Saba Noor, aged seven, who was killed by a leopard near her village of Badyala in January. Officials say women and children are more vulnerable to such attacks.

Muhammad Zafran, 45, said his father, Muhammad Jan, 65, was hospitalised for six months and eventually died after a leopard attacked him in January 2014. “It was 7.15pm, in the dark of winter … the leopard hid in the bushes and jumped on him,” Zafran said. “My father’s right hand was bitten and his head skinned, and hair pulled out by the leopard with just one tug.”

But wildlife officials say reports of man-eating leopards are, in most cases, overblown.

Uzma Khan, director of species conservation at the World Wildlife Fund Pakistan, recently completed a doctoral dissertation that examined the circumstances behind the recent attacks. She concluded that the leopard that killed Noor in January did not consume her, suggesting that the animal mistook the child for other prey. In January 2011, a reported attack on a 35-year-old man turned out not to have been an attack at all. Instead, Khan said, the man fell and hit his head on a rock when a leopard leaped from a bush and startled him. Khan has no record of an attack resembling the one described by Zafran, but she said non-fatal attacks were reported here in 2005, 2007, 2008, 2010 and 2013.

But efforts by wildlife officials to dispel rumours of “blood-sucking” leopards are complicated by past attacks in which humans may have been targeted as food. In November 2011, an 11-year-old girl and a seven-year-old boy were killed in separate attacks. In each case, Khan said, the leopard ate part of the corpse.

A series of attacks over 10 days during the summer of 2005 resulted in the deaths of six women near Abbottabad. In two of those cases, Khan said, the leopard ate part of its victim. Overall, however, research suggests that someone is far more likely to be killed by a tiger in India or a lion in Africa than by a leopard in Pakistan, she said.

In Pakistan, retaliation is often swift. Dozens of leopards have been killed over the past decade; three were reported to have been poisoned near Abbottabad in March.

“People are scared,” said Syed Mushtaq, 38, a social worker in Bagh, 25km southeast of Abbottabad. “The people move in groups with sticks and guns … because the leopards don’t attack groups of people.”

To try to protect villagers as well as leopards, officials here are urging residents to remain indoors after sunset and directing schools to dismiss their students by mid-afternoon.

“We are trying to educate people when it’s not safe to enter the forests, and that little children should never go into the forests alone,” Khan said. “So, we are saying, ‘You must let children go home [from school] by 2pm so, if they have to walk an hour, they are home well before sunset.’”

For a big cat to roam, you need a much bigger area – Uzma Khan, World Wildlife Fund Pakistan

Several of the most recent attacks occurred when children were crouched in the woods to relieve themselves. Women are attacked more than men because they spend more time in the forests, Khan said.

“Women here have more responsibility for household chores like wood collection, water collection and collecting fruit,” she said. “They have to make breakfast for their husband or children, before school, so they go into the forests early in the morning … We are saying, ‘Don’t go when it’s dark’.”

Though such messages may help to limit encounters in the short term, Khan said Pakistan’s government also needs to set aside more protected forests. Wildlife officials recently collared a male leopard and determined that it has a range of about 90km. Near Abbottabad, the largest track of protected forest is the 50 sq km Ayubia National Park.

“For a big cat to roam, you need a much bigger area,” Khan said.

Changing the mindset of Pakistan’s government, however, won’t be easy. Earlier this month, Prime Minister Nawaz Sharif proposed a new highway to connect the capital, Islamabad, with Murree, a resort town 65km south-east of Abbottabad. The highway – and the development it would bring – would slice through even more prime leopard habitat, Khan said.

WHO experts to visit China as part of COVID-19 investigation