The problems with this kind of decision-making are clear, yet such methods are increasingly used in opaque and frightening ways 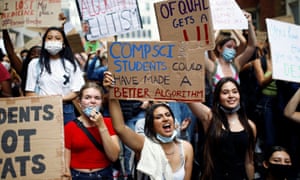 Living the nightmare … A-level students protest outside the Department for Education in London this month. Photograph: Henry Nicholls/Reuters

Have you ever had a dream in which you are about to sit your final exams and you suddenly realise you did not do any prep and are going to fail? I have that anxiety dream a lot (it is always a maths exam), despite having left school a million years ago. And I am not the only one: it is a surprisingly common phenomenon.

While that dream is disturbing, it is nothing compared with the nightmare British students have just lived through. The pandemic meant school-leavers did not get to sit their Highers or A-levels; instead, algorithms determined their grades – and their futures. A lot of kids from poorer backgrounds had their final results dramatically downgraded from teachers’ predictions; pupils at private schools, meanwhile, were treated remarkably well by the algorithms. After enormous controversy, the Scottish and UK governments performed U-turns, saying exam results would be based on teacher-assessed grades.

This is not the first time the UK government has suffered embarrassment by algorithm. Earlier this year, the Home Office decided to scrap a “racist algorithm” for visa applicants that was accused of creating “speedy boarding for white people” while making things harder for everyone else. And a security thinktank warned last year that predictive policing algorithms could amplify human bias and make it more likely that young black men would get disproportionately stopped and searched compared with people from other demographics.

Mysterious algorithms control increasingly large parts of our lives. They recommend what we should watch next on YouTube; they help employers recruit staff; they decide if you deserve a loan; they help landlords calculate rent. You and I may have aged beyond school exams, but it does not matter how old you are – these days, it is almost guaranteed that an opaque algorithm is grading and influencing your every move. If that does not give you nightmares, I am not sure what will.